This spring was our tenth year in a row going to PAX East! The first time we went, which was also the first time PAX East was held, I was still a graduate student living in a tiny apartment, and now I have a full time job and own a house. I grew a lot in the past ten years, and it’s funny to look back at all the past PAX Easts and think about how much both the con and we have changed.

Because PAX East took place the week after Costume Con this year, and both were being held in the Boston area, I didn’t bother flying back home in between them. I stayed with some good friends for a couple days, and then Mike flew up and met me on Wednesday. (Packing for two cons was a bit of an adventure. I’m glad I got everything into my suitcases!) This was our first time going to PAX East without any other friends in tow. It was just me and Mike.

The con started on Thursday, which is the quietest day. It’s nice, because it makes it easier to see the Expo Hall and shop from the vendors when it is not so crowded. There is also usually less cosplay on Thursday, but we saw a few folks dressed up. (I will post separately about the hall photos and shoots that we did.)

The Expo Hall on Thursday. You could see the floor! 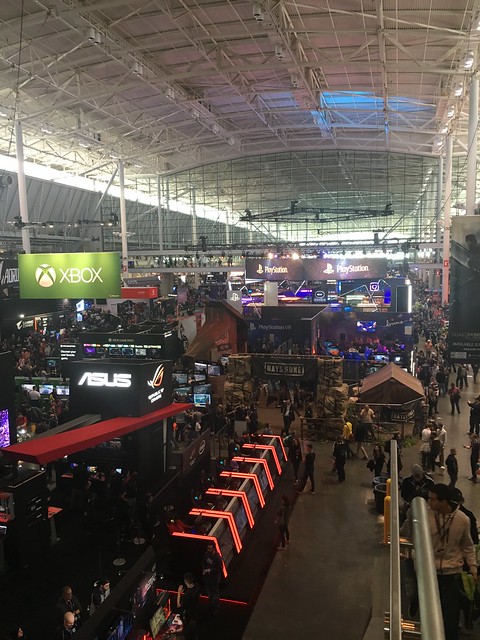 Mike noticed on Twitter that Rich Shertenlieb, of the Toucher and Rich show, was attending PAX East on Thursday. T&R plays in Boston on our favorite sports talk radio station, 98.5 The Sports Hub. (Mike and I couldn’t bring ourselves to switch to DC sports talk radio when we moved away from Boston, so we still listen to 98.5 online.) Mike tweeted at Rich, and Rich was kind enough to come over and sign an autograph and chat with us briefly.

(Just to ensure we would not become some on-air radio comedy bit, Mike and I both mutually agreed that “it was not okay to use this on the radio” should we be asked. Turned out that was not an issue, and Rich was totally cool to talk to.)

A hall shot from 1TwentyOne Photography. I think we ran into him almost every day of the con! He was really nice and complimentary of my costumes. 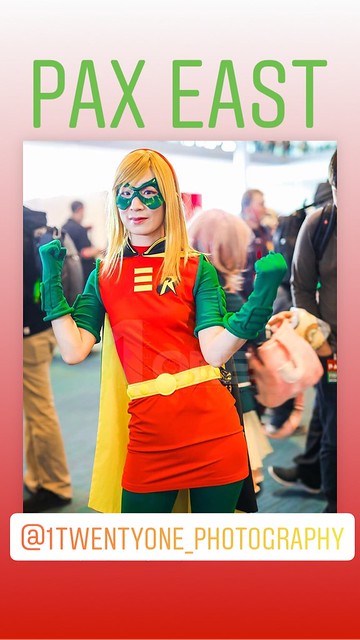 We also attended a few panels on Thursday. PAX East was pretty good about having a bunch of interesting panels this year.

We went to one on the generational changes in gaming consoles, where the panelists were several different gaming journalists. 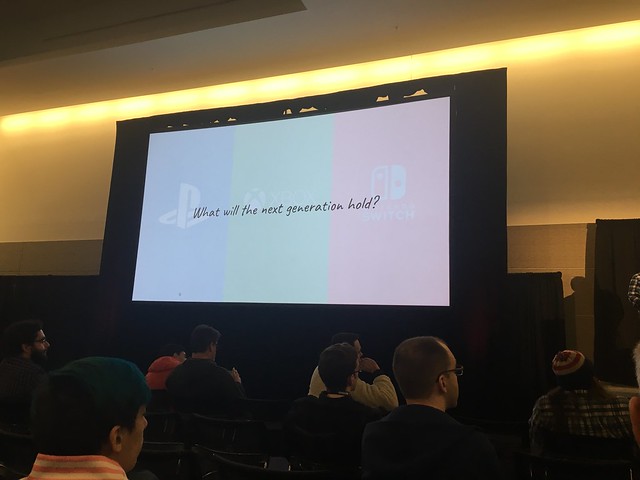 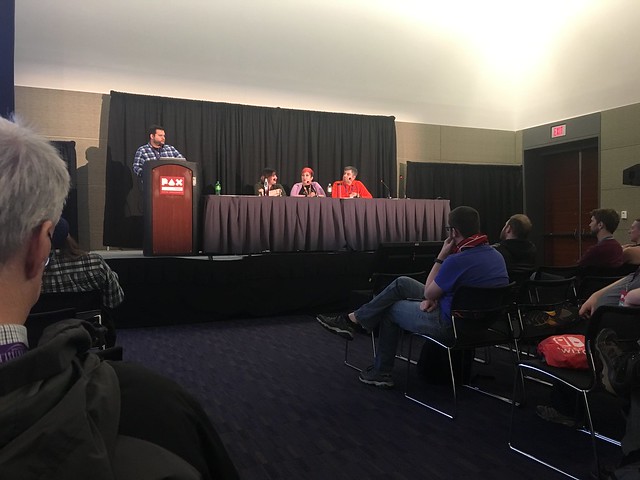 There was an interesting session on cosplay materials, which included Rocket Props and Vee Cosplay on the panel. 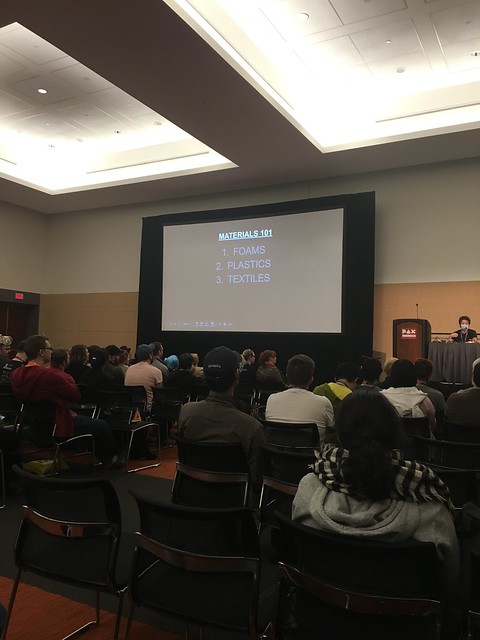 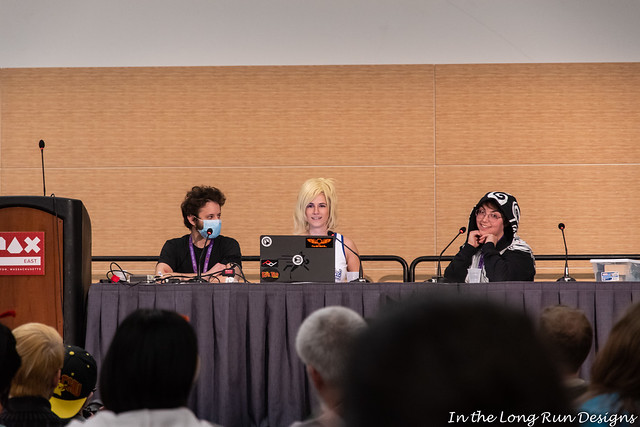 Mike finished the day at the Acquisitions Incorporated book panel. 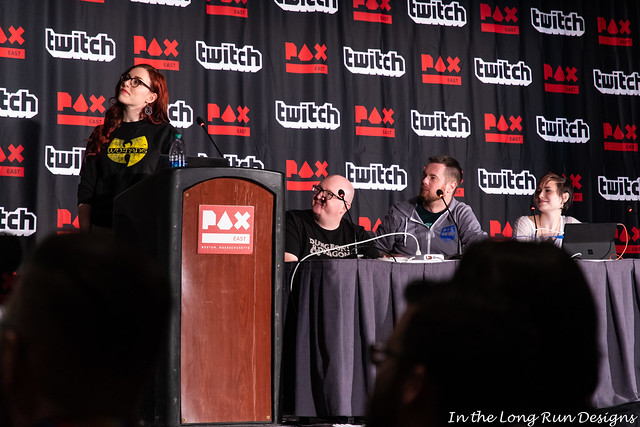 Friday was way busier than Thursday, with larger crowds and more cosplayers in attendance.

Here is the Expo Hall on Friday. The floor was getting harder to see! 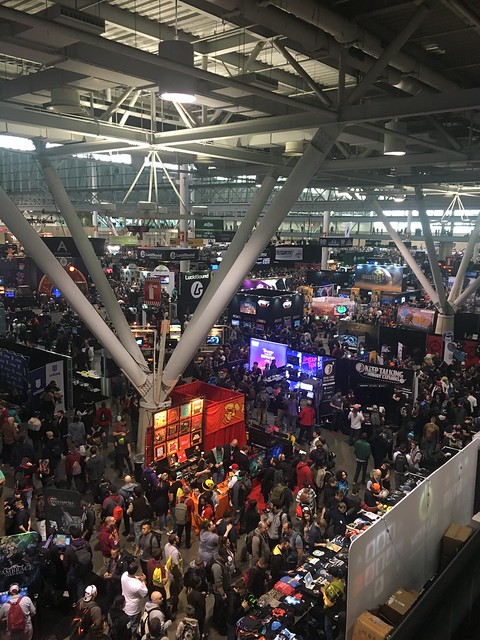 We ran into Kelly, who I had met the previous weekend at Costume Con. She had an awesome Rayne cosplay. 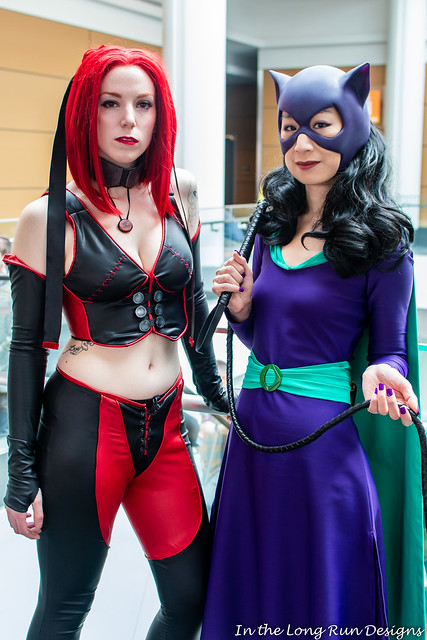 We saw this cool Batman in the Expo Hall. 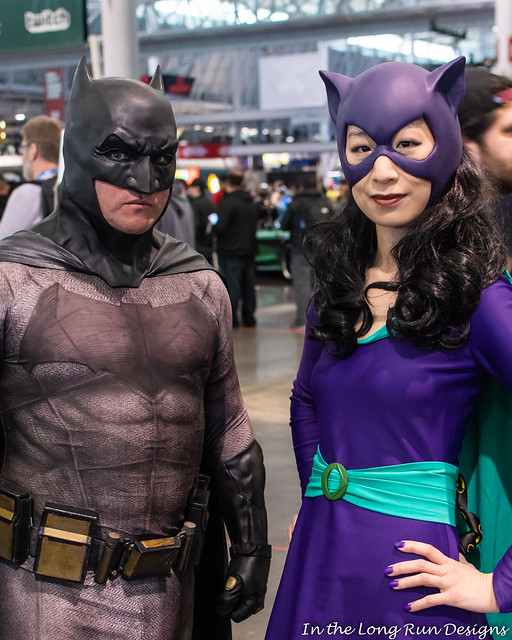 A fun hall shot from Chris, who we met in the tabletop area. He only had stickers for his non-photography business to hand out to me, so I’m glad he tagged me on Instagram, so I could find his photos later. 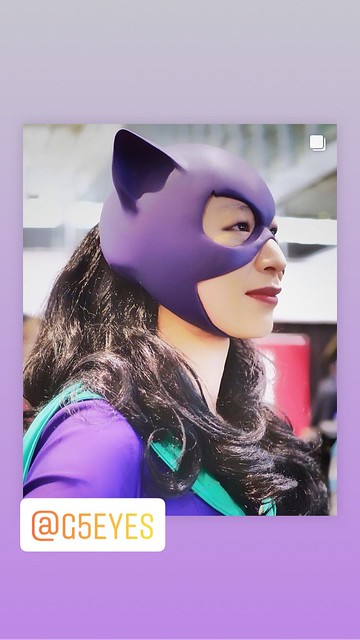 Another nice hall shot, this one by Raymond Chan. 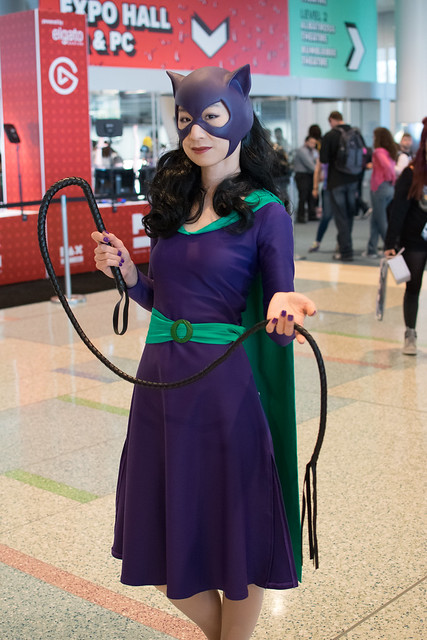 We went to a panel on 3D printing for cosplay, led by Lee Lee the Bunny. We have always enjoyed her panels at PAX East over the years. 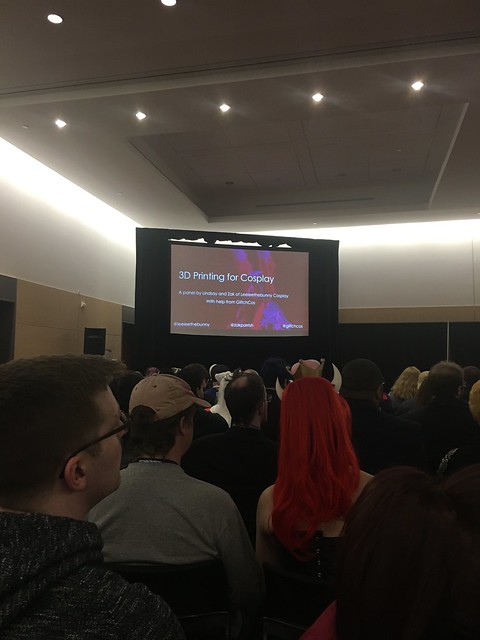 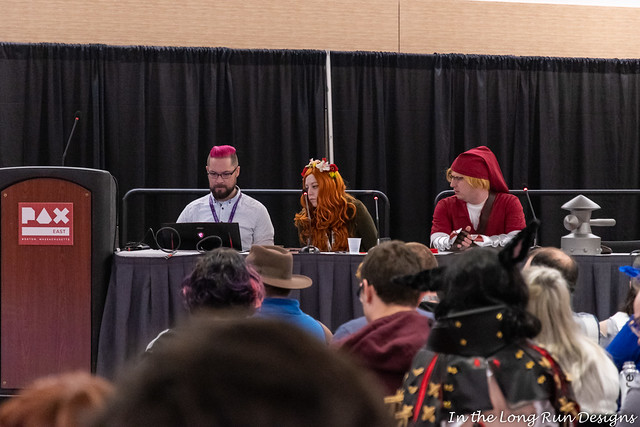 At the end of the day, I changed back into street clothes, and we went to the Cosplay and Photography Shoot-Out panel hosted by First Person Shooter, Wonderllama Photography, Bethany Maddock, and Kayhettin Elysium for Nerd Caliber. 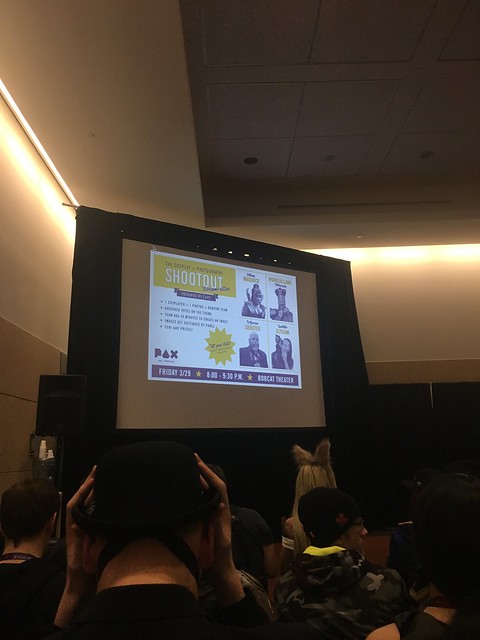 This panel turned out to be one of the highlights of the weekend. The audience voted on a theme, and then randomly paired cosplayers and photographers had to go out into the convention center and take a photo that reflected that theme. The results were discussed and ranked. The chosen theme was “Game Over!” Mike and I went as photographers, and we only had about 30-45 minutes to find a location and get a shot. It was also nighttime, so lighting was tricky.

Mike and I were paired with Jon, who was cosplaying for the first time ever at a con. He was costuming as Kakashi Hatake from Naruto, which neither Mike nor I was familiar with. So we decided to concentrate on figuring out a lighting pattern that would get a good photo, given the time crunch and how dark it was.

This was the area where we set up to take a photo. (We took this picture on Sunday, when there were more people around and I was dressed as Princess Luna. Imagine that those people sitting behind me were not there, just the security guard at the doors.) The wall with the white panels and black baseboard was what we planned to use as a background. 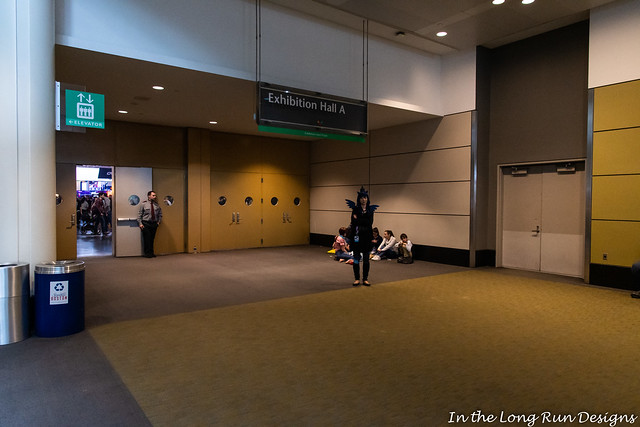 We had brought one flash with us, but no softbox like we would normally use at home. We only had a reflector and a light sphere/diffuser dome. So we just started trying different combinations of me holding the flash with various positions of Jon relative to the wall. Eventually we realized that I could get directional light if I partially wrapped the domed head of the flash with the fabric carrying case for the reflector, which blocked the light from hitting the wall behind Jon, but still illuminated him. This makeshift flag blacked out the background pretty well.

Once we had the lighting pattern figured out, we got a bunch of nice shots. 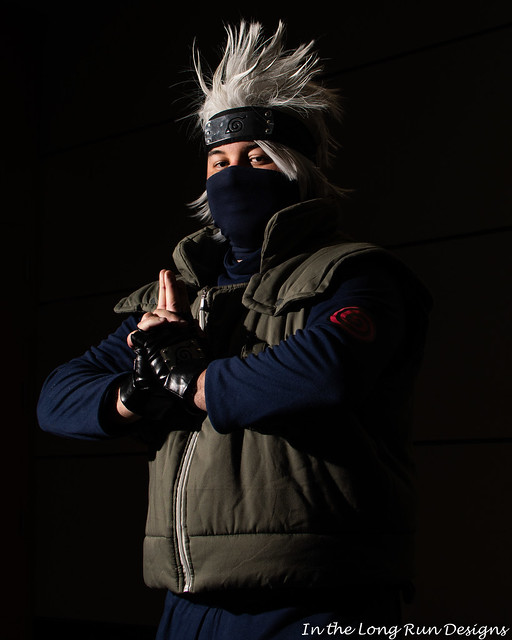 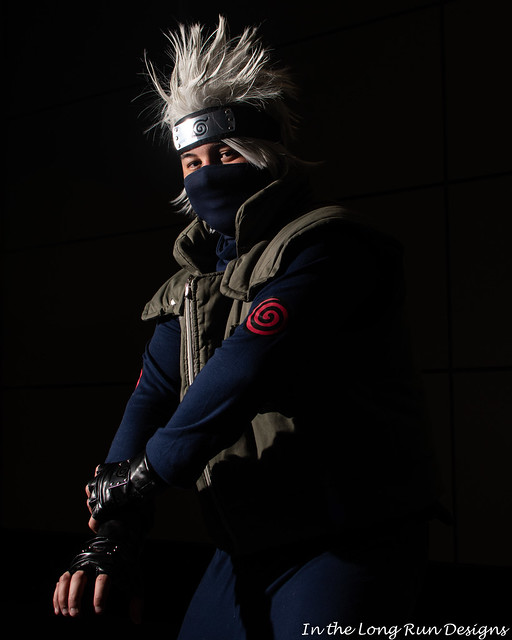 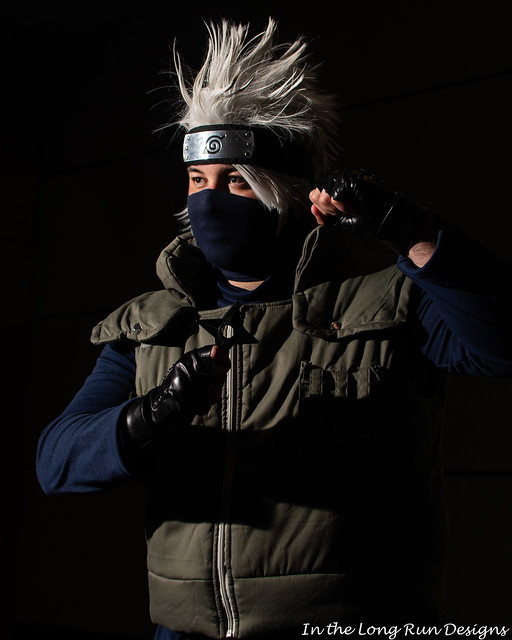 And this is the one we submitted to the contest. It admittedly does not necessarily fit with the “Game Over!” theme, but we were proud that we figured out how to get this look in a hallway with one flash and no softbox. I really like the shadows on the floor and the texture we captured in his wig. 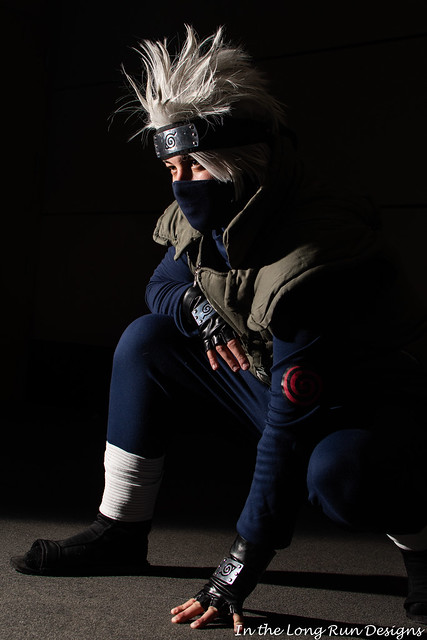 You can see all of the photo entries here. It was very cool to see the creative ways that folks tackled the theme in a tricky environment to get photos. Some of the highest placing entries were done with camera phones, and some people were using things like camera phone flashlights or ambient light from TV screens and monitors to get their shots. This all goes to show that you do not need fancy equipment to get a great picture. You just need to know how to use what you have to the best of its ability.

On to Saturday, which was the most crowded day. The main activity for this day was to see the Waypoint Radio panel. Mike listens to their podcasts a bunch, whereas I was not that familiar with them. But they were very entertaining speakers, even when discussing a game I don’t play (Kingdom Hearts). 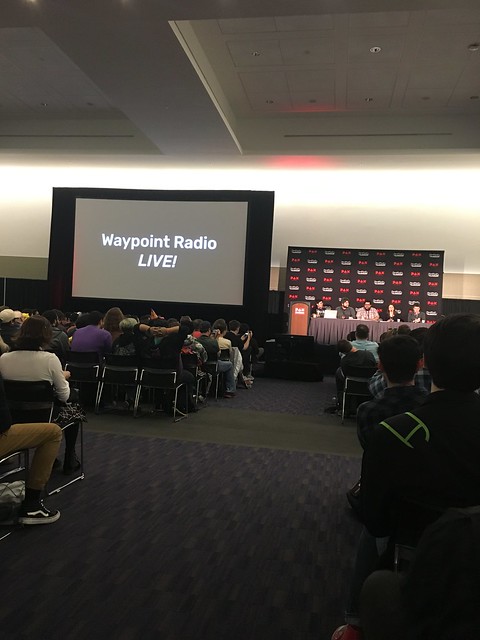 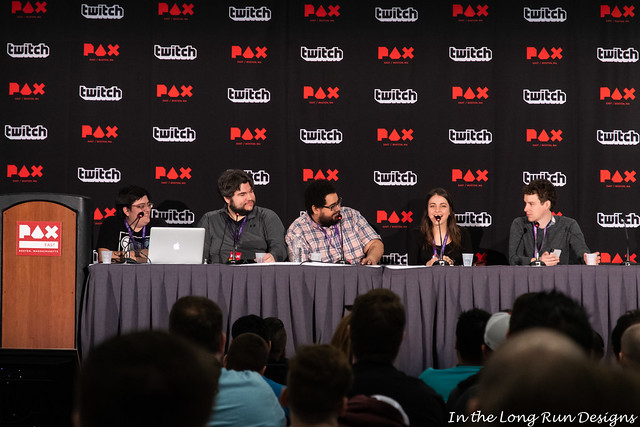 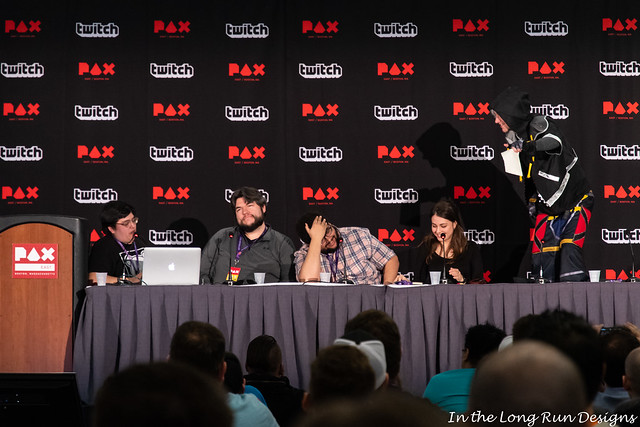 I wore my Diana Prince suit from Wonder Woman, which I had also worn at Costume Con the weekend before. I figured doubling up on costumes was a good idea, given the limitations of luggage space.

Two Wonder Women! Me with Jessica. 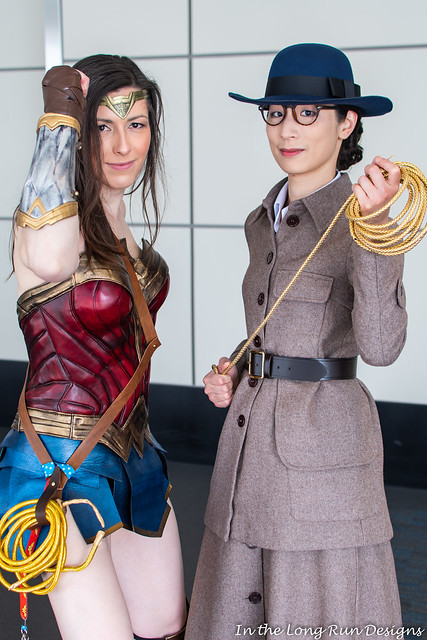 It was nice to see Grace again, who we had met at a previous PAX East. 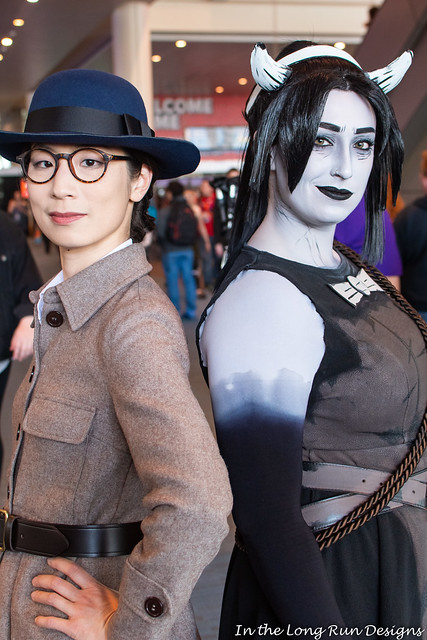 We also went to a panel on cosplay photography. 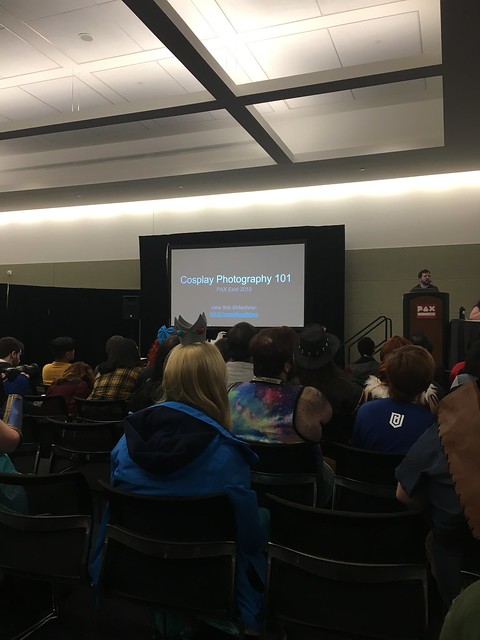 And then we had made it to Sunday. I went with an easy costume (Princess Luna), and we mostly spent the day seeing things in the Expo Hall that we had missed earlier. 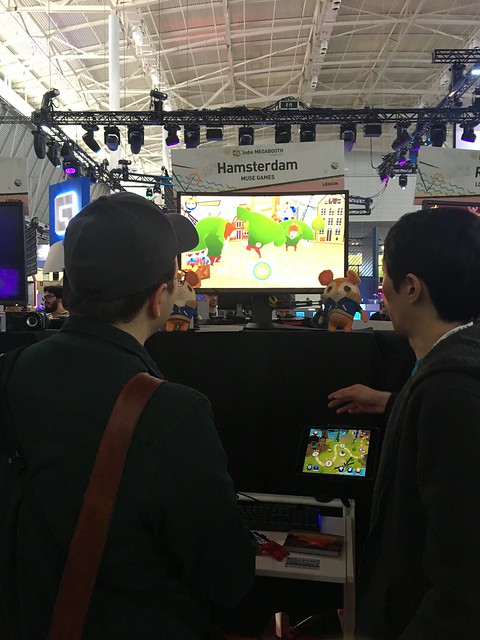 Facebook had one of the largest booths this year. 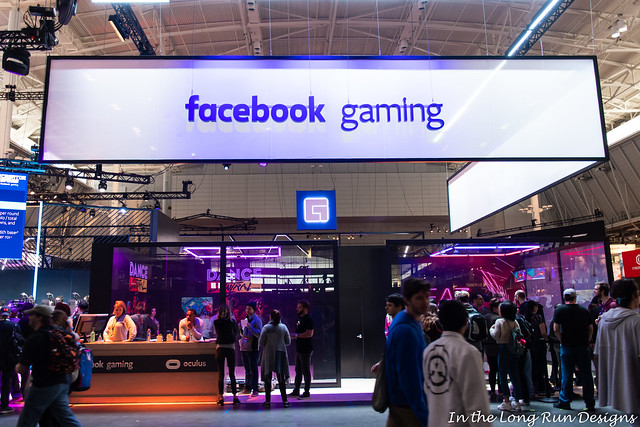 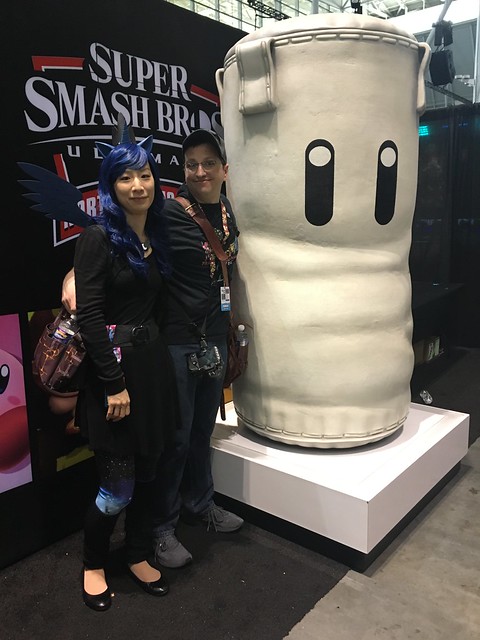 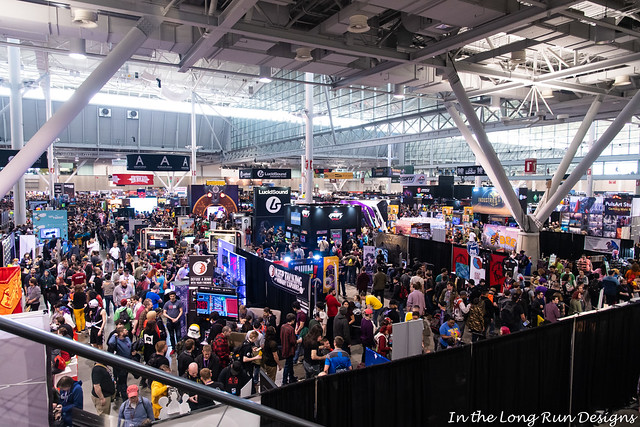 And that was a wrap!